How Much Should I Feed My French Bulldog Puppy? 6 Best Factors

When I first bought Fluffy at home, I had no idea how much should I feed my French Bulldog puppy.

The problem was I never had a French Bulldog puppy feeding chart since I had never owned a dog before.

Then a thought came to me. Every new dog owner has to visit the vet to understand the best way to nourish the little buddy.

Here’s a glimpse of what he told me about how much I should feed my French Bulldog puppy.

For every new dog owner of a Frenchie, this is a short and crisp answer and a good thumb rule to follow.

However, it has been over three years since I have been a French Bulldog owner.

Hence, I decided to provide some valuable insights to those who have recently owned a Frenchie and would like to get the answer:

I will share my insights on my French Bulldog puppy’s feeding schedule in his younger days and how it worked mutually for both of us.

So, without much ado, let’s get started.

I have provided a picture of the French Bulldog puppy feeding guide below. It consists of rough guidance on the best way to schedule and plan his feeds.

You will also get a fair idea about other factors you might need to consider. I would recommend you print it out and paste it onto your fridge.

What Should Be The Exact Number Of Cups Of Food That I Should Feed My French Bulldog?

Before peeping into the French Bulldog feeding chart below, you might want a quick answer to how many cups of food you feed your French Bulldog.

As a general thumb rule, I would suggest you feed a French Bulldog puppy aged 8 to 12 weeks approximately one and ½ cups of food daily. This should be done in three separate meals.

As your Frenchie grows old, the number of cups you feed him will change. Check out the cup amounts and frequencies in the French Bulldog feeding chart graphic given below.

The chart above has been taken from the Royal Canin dog food range. This is what we fed Fluffy with as he grew up.

The good news is the range of specific French Bulldog puppy food.

On the packaging, you will find a version of the chart depicted above, answering your question: 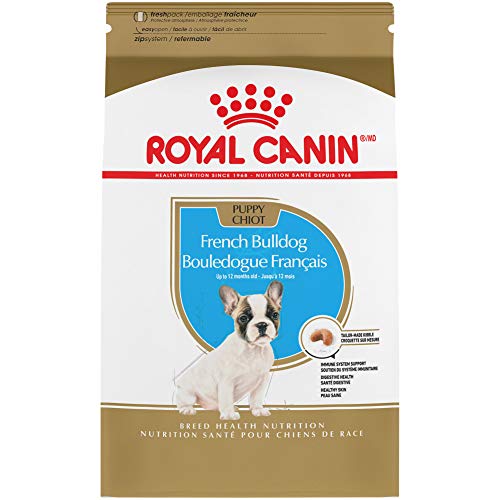 This is the food advised by my vet, and I noticed that it had reduced Fluffy’s farting and flatulence after regularly giving this puppy meal.

On top of that, he did not feel sick, unlike other brands offering dog food.

I would also suggest you use an appropriate feeding bowl to stop your Frenchie from bloating and possibly choking.

How Much Should I Feed My French Bulldog Puppy?

Before I proceed further, I assume that your puppy has already been weaned off his mother’s milk. Please note that the weaning process typically happens over a 2-to-3-week period. It would help if you didn’t have a younger puppy away from the mother.

While you take the puppy to his new home, he should already be used to eating puppy food.

If that was not the case, he might have been taken away from his mother too quickly.

As enumerated earlier, it is essential to feed your French Bulldog puppy three times daily.

Remember to feed them regularly in their growing age, wherein they burn many calories. This shows how energetic they are in their formative years.

How much should I feed my French Bulldog puppy every mealtime? will be typically ½ of their dry puppy food.

The whole day will be equivalent to 1.5 cups of food in total.

This should continue as a thumb rule until they are about six months of age.

After that, their weight and health will then determine how much you should feed your French Bulldog puppy as and when they grow older.

Calories Are Extremely Vital But Are Very Difficult To Count

When French Bulldogs get older, try to feed them as per their weight.

As a rule, you should feed them 25 to 30 calories for every pound.

You can’t keep track of the number of calories your dog is eating.

However, for the rest of this French Bulldog feeding guide, I will just talk about feeding in terms of cups.

This will make it easier to measure how much you should feed your French Bulldog puppy.

Weight Of Your Puppy

Now you might ask how I should weigh my puppy. Should I take him to the vet?

It would have been amazing if your puppy knew how to measure them on a scale at home.

However, it will not show as precise results as a scale with your vet.

However, trying at home for you and your puppy can be a cheap and fun experience.

Age Of Your Puppy

As told earlier, it usually takes 2 to 3 weeks for a French Bulldog puppy to be weaned off its mother’s milk and adjust to either dry and/or wet food.

Due to this reason, your puppy might show stubbornness about eating dry and wet food in case they have been weaned off recently.

Here is a comprehensive way of looking at things. However, don’t worry; I will try not to make it complicated for you.

While your puppy is between 8 to 12 weeks of age, it should be fed roughly 1.5 cups of food daily.

Remember to keep the food high in calories since they require additional nutrients that they no longer get from their mother.

This is followed by the main rule of feeding them three times a day.

However, if your pup is younger than that, you can split the 1.5 cups into four smaller meals daily.

The reason is that feeding them 0.75 cups twice daily can be too large a meal.

Also, large meals result in gastric dilation volvulus, also known as twisted stomach or GDV, which can be life-threatening for your puppy.

Once they are between 6 to 9 months of age, they will get used to this eating routine.

This is when the main rule will be applied because the puppy will be maturing to adult size and weigh between 20 and 25 pounds.

What About Older Dogs?

Once your French Bulldog starts hitting the senior years, they should be fed as little as lengthy if they are not very active.

As soon as you find that they are gaining weight and have become lazy, limit their calorie intake to 400 to 500 calories daily.

Ensure that you still break their meals into 3 to 4 times like puppies, as it is not uncommon for dogs to get their stomachs weaken in old age.

It is typical for a French Bulldog to weigh between 8.5 to 12.5 pounds when they are about three months old. Once they reach 6 to 9 months, they are closer to reaching their adult weight, between 15.5 to 23.5 pounds.

If your puppy is underweight, I suggest you add tiny increments to every meal daily until they are underweight.

Also, never give them a lot of food as there is every possibility for them to get a twisted stomach.

If your puppy is overweight, you need to reduce their meal size till they lose weight slightly. You can also give them more exercise.

Most dog owners prefer the latter option as it strengthens their puppies and allows them to bond with them.

If the dog does not appear to be gaining weight while underweight by eating additional food or vice versa, consult with your vet.

It can be a sign that something is affecting their health.

Every animal is different; hence, getting your pup checked and learn more about its size and weight is critical.

Certain health factors like diabetes can make your pup need a more strict diet in the feeding routine.

So here you have a complete guide:

Everything I have explained about their feeding schedule and the French Bulldog feeding chart as per my personal experience.

Now Fluffy is fully grown (4 years old). And I feed him twice a day—one time in the morning and another in the early evening.

Keep a regular feeding routine for your Frenchies, and keep them as healthy as you are!